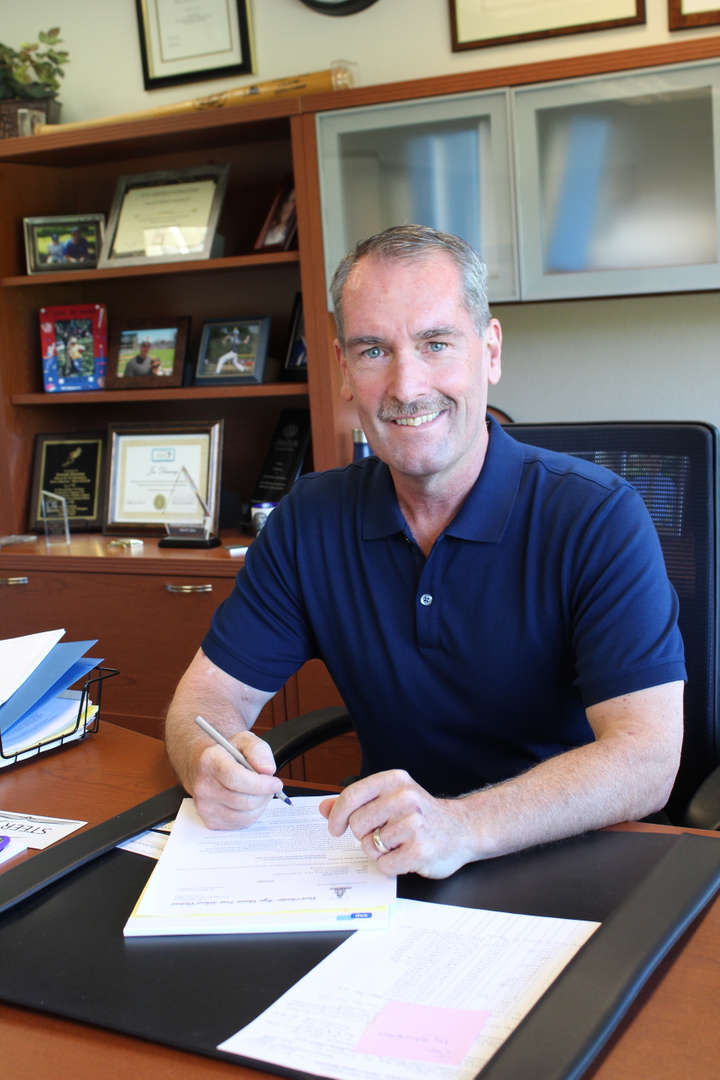 Port Chester Schools’ Deputy Superintendent Joseph Durney announced that he will retire in December 2019. The first half of the 2019-20 academic year will conclude his three-decade career in the district.

While his retirement is on the horizon, Mr. Durney has not lost sight of his priorities and responsibilities for Port Chester Schools. The summer has been an eventful season, with much time spent on human resources projects and securing state and federal grants.

“I’m too busy to be hit by thoughts of retirement yet,” he said. “I’m working with teams of colleagues on all kinds of developments.”

Mr. Durney explained that the timing of his retirement is very appropriate for him and his family. He has been an instrumental staff member within the district for more than 30 years, his youngest child recently graduated from the high school, and he and his wife (a teacher at Thomas Edison School) are looking forward to being empty-nesters.

Following his retirement, Mr. Durney plans to pursue a doctorate degree from New York University. He was inspired to continue his education after participating in a years-long educational program through the Harvard Graduate School of Education, which reignited his interest in academic study.

His upcoming doctoral program will explore acquiring nonprofit and corporate support for public schools. Its focus reflects an important component of Mr. Durney’s current work in Port Chester. Over the years, he has worked diligently to cultivate and expand relationships with community stakeholders, who, ultimately, support students and their families. Among these are special partnerships with school-based health centers, Family Services of Westchester, the Carver Center’s after school program, the state’s Council for the Arts, SER of Westchester, Girls Inc., Big Brothers Big Sisters of America, and STEER for Student Athletes.

Mr. Durney explained that these community collaborations are unique to the area, which he engineered into one of Port Chester’s great successes. For example, when he began working in central office overseeing health services, there was only one school-based health center in the whole district. Now services can be accessed easily at all schools.

“This expansion was a victory for Port Chester,” he said. “We created these wrap-around services for our students so they can be successful in class. It’s difficult for anyone to succeed academically if they are in need of medical care, are hungry or have family and social issues. But now they can take full advantage of our high-quality, bilingual educational services. We have a high-needs district with excellent outcomes.”

Many of the programs, which are available to every student, are made possible through federal grants that lower the cost to taxpayers. In addition, Port Chester’s schools offer free-and-reduced lunch and universal free breakfast through a federal initiative.

“It’s a game-changer for our students,” Mr. Durney said.

Throughout his tenure, he placed great importance on developing relationships with everyone working in Port Chester’s schools – from the support staff and teachers to building administrators.

“It’s important to get to know people well,” said Mr. Durney, who is in charge of human resources and personnel. “It’s vital because good people make good organizations. It’s imperative that I know who is working with our kids. I ensure that the people hired to work with our children are the kinds of people I would want working with my children.”

As relationships and knowledge of each school’s culture are paramount, Mr. Durney makes a point to meet with each new hire – something that doesn’t always happen in other districts. In addition, each week during the year, he visits one school every day to understand the environment and continually feel connected to the children he serves.

“I will continue the walk-throughs until my last day here,” he said. “I do them regularly to talk to the people and hear what’s going on. There are a million things that happen behind the scenes to make the district run smoothly. Also, at this level of administration, it’s important to have your finger on the pulse of each school.”

Reflecting on his long career, Mr. Durney said that one of the biggest changes he has seen in Port Chester has been the shift in demographics. Nevertheless, he said that while the students and parents have changed, the children continue to arrive at school with a desire to learn and their families continue to support their educational journeys.

Mr. Durney said that the district’s triumphs would not be possible without its leaders. “One of the most rewarding things for me is knowing that we have a Board of Education that understands our mission’s value and supports it.”

As the 2019-20 academic year approaches, Mr. Durney continues to quickly and deliberately complete the summer’s work and prepare for a successful back-to-school period.

“My ethic has always been that you play hard until the last minute of the game,” he said, speaking as only a former coach could. “You leave nothing on the table and leave it all on the field.”