The Port Chester-Rye Union Free School District has been underfunded by $145,452,292 over 10 years, violating the constitutional rights of our students to a sound and basic education regardless of zip code.   By freezing Foundation Aid and using designated state aid to fill Albany’s budget gaps, statewide school funding is now inadequate.

Port Chester is designated as a “high needs” district, with 72% of our students qualifying for Free and Reduced Price lunch and 28% requiring ELL services.  Our enrollment continues to climb, and we are now the most underfunded of the eight underfunded districts with increased enrollment in New York State.

How Does NY State Provide Aid to School Districts?

Foundation Aid:  Foundation Aid is unrestricted aid to school districts.  It includes a formula designed to increase funding to the neediest districts in the state.  Foundation Aid was established in 2007 as a result of a lawsuit brought by The Campaign for Fiscal Equity in order to meet the state’s legal obligation to ensure that all districts could provide a “sound basic education” for their students.  The funds were to be phased in over four years, and larger increases were scheduled at the end of the four years.

In April of 2009, Albany froze Foundation Aid at 2008-2009 levels.   Not only did we never receive the aid due us under the law, in that time Albany and Washington have passed additional costly mandates and inflation has taken its toll.  On top of that, Port Chester’s student population has increased by 619 students – with no corresponding increase in aid.

In the years since, we have lost more than $145.5 million in Foundation Aid.

Other state aid is provided to help pay for voter approved capital projects, for services we purchase through BOCES, library books and computer software, transportation and tuitions for our highest needs children.  These expense driven aids are minimal when compared to Foundation Aid.

What is the Gap Elimination Adjustment?

As the New York State governor and legislators developed the state budget in recent years, they filled a gap between expenditures and revenues by raiding Foundation Aid funds for the schools.  The shortfall has been divided among all school districts in the state, creating a Gap Elimination Adjustment (GEA).  It is a negative number; money that is deducted from the aid due to our district.

The NY State School Boards Association has an excellent brief that explains the GEA.  You can read it online by following this link.  The GEA was halted for the 2016-2017 budget year, but its impact is still felt.

Here are the Numbers 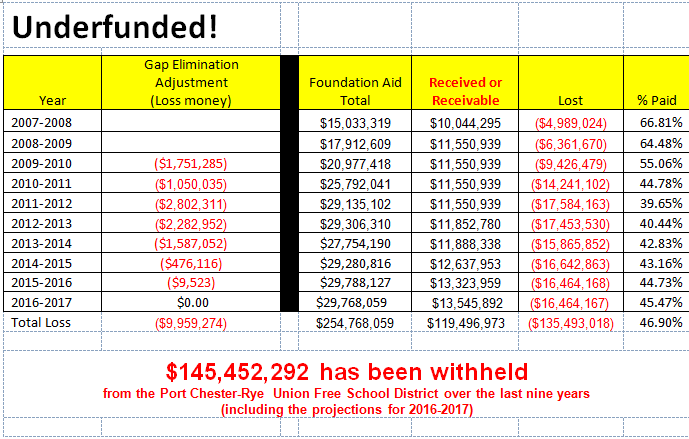